Following the journey of award winning author, Alex Azar, as he travels the publishing world and all things interesting. To reproduce or publish any material found within this blog, please contact me at azarrising@hotmail.com


Fellow author Ed Ahern, writer of "The Best of Taste" published in Strangely Funny, shared his insights on the anthology and writing in general. Read on... 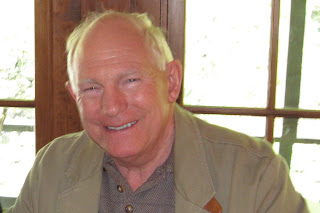 Q. What was your inspiration for "The Best of Taste"? Please say it wasn't personal experience.
I try and stay one idea ahead of the story I'm currently working on. The process is akin to trapping bubbling swamp gas. I was suffering through a television commercial for an (unnamed) dating service when the bubble burst. What would a service be like for the truly maladjusted and sexually deviant? As a primarily fantasy writer, I added a witch as personal advisor for our misunderstood bad boy. Had I written the story as straight horror, I would probably have had to submit it to one of the erotic publishers, so I also layered in my normally twisted sense of humor. From there it pretty well wrote itself.

I used the chatty e-mail format as what I hoped would be a reasonable substitute for dialogue, and as a vehicle that let me play with the wordings a bit more. I have a weakness for bad puns, hence "The Best of Taste" - a story about terminal bad taste that wound up tasting good.
Q. "Foreign intelligence and international sales" sound like interesting day jobs. Can you reveal anything about them? Did any of them involve online matchmaking sites? 900 numbers?
The classification period is long gone by on my "foreign intelligence" stint, but I'm one of those folk who kept his mouth shut. It involved living for four years in Germany and three years in Japan, and speaking both languages pretty well. As a German contact once told me, "Any American who speaks German that well is a spy." "International sales" was a comfortable living but more mundane. I sold newsprint from a large Canadian company in 73 different countries over a quarter century in four languages. Unfortunately print newspapers were going through their decline and fall during this period, and the really good times went away early on.
Q. What is your current project? Tell us a little about it.
It's a horror short story about father love when the infant son turns out to be unlovable. I'd tell you more about the plot, but I don't want anyone to pinch the idea before I've had a chance to shop the story around. Just finished a horror/mystery novella where the hero is a defrocked priest and his assistant is an aggressively lesbian woman both involved in trying to root out a murderous witch's coven ( yes, back to witches.)

Q. What made you decide to write your own stories?
My undergraduate degree is in journalism, and I worked as a reporter for a year, but had always wanted to tell fiction stories. When I finally retired at 68, I'd already taken a couple writing work shops and discovered how low I was on the learning curve. It's taken three years, but 39 stories have been accepted so far, most of which have also been reprinted.
Q. We know you're an author. What do you enjoy reading?
Hopefully the GIGO principle doesn't apply to my writing, because I dump a lot of garbage in. Okay, not garbage, but pulp fiction. I stay a book ahead of HBO's Game of Thrones with J.R.R. Martin and read a fair number of fantasy and science fiction anthologies. I usually leaven a fiction book with a non-fiction one, and try not to read two books at once, because for me the reading experience for both books suffers. I dip back into David Foster Wallace's essays and fiction periodically, and emerge every time impressed as hell with his writing skills and frustrated with his obtuseness.
Ed Ahern's bio:
Ed Ahern resumed writing after forty odd years in foreign intelligence and international sales. He has his original wife, but after 45 years they are both out of warranty. Ed dissipates his free time fly fishing, shooting and attending French, German and Japanese language groups.