Following the journey of award winning author, Alex Azar, as he travels the publishing world and all things interesting. To reproduce or publish any material found within this blog, please contact me at azarrising@hotmail.com

If you didn't realize from my previous posts about Batman's 75th anniversary, I'm a bit of a comic fan. As such I thoroughly enjoyed a six issue comic series called The Escapist which came out in 2006.  The story revolved around a golden age era comic hero I hadn't heard about getting a retelling in more modern times.  It wasn't until after I read the series that I learned there never was a golden age Escapist, but that the character was created for a book that was published in 2000.  That book? "The Amazing Adventures of Kavalier & Clay" by Michael Chabon and it tells the story of two Brooklyn cousins, Jewish immigrants of WWII, who decide to create comics together. 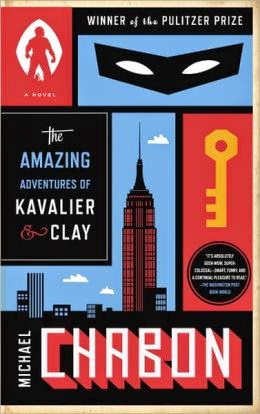 I can safely surmise that this inspires the creation of the Escapist character.  How that story develops is what has me intrigued.  And the fact it won a Pulitzer Prize as a piece of historical fiction based on a non-existent comic character makes this a book I've been looking forward to reading.

Email ThisBlogThis!Share to TwitterShare to FacebookShare to Pinterest
Labels: What I'm Reading

Last week I received some huge news.  I probably could tell you more at this point, but I'd rather draw it out.  So, all I'll say is, check back often for the biggest news I've ever announced.

Email ThisBlogThis!Share to TwitterShare to FacebookShare to Pinterest
Labels: Writings

Growing up I never really had an issue with pimples.  Sure I got the stray bump while going through those awkward teenage years, but it was never so bad as a problem.  My skin, aside from the various scars I've acquired from the follies of youth, has always been mostly blemish free.

Why am I telling you this? Perhaps because it's three a.m. Thursday night, or if you prefer early Friday morning.  I'm of the belief that it's not the next day until you've gone to sleep and awoke on the other side of the hours past. Although, if that were true with my insomnia I'd be living a year behind everyone (time travel is possible!)

But the other reason I mention my very limited experience with pimples, is that I'm currently sporting two on my forehead greeting my hairline.  Granted in a few years my hair will have retreated away from this point on my head.  They're small, inconspicuous bumps most people probably can't notice but I sure as hell do.

I'm pretty much hoping they are in fact the result of spider bite for the simple fact that the alternative suggests that stress is the cause.  Those who know me well, know I am not one who stresses.  Things roll off my back with ease, and I can find the good in almost any situation.

So what is it at this point in my life do I have to stress about?  Hopefully just spiders in the bed.  Sleep well readers.
Posted by azarrising at 4/04/2014 03:19:00 AM No comments: Links to this post

There's a strange dichotomy within me.  I'm very much a fan of Stephen King, however I haven't read many of his novels.  My fandom of his exists almost entirely with his short stories, (a large influence of my own style) however there are actually only a handful of his novels that I've already read.  Of course my opinion of the bard has been influenced by the plethora of movies/tv specials based on his storied career, but I'm just now making the conscious effort to read the novels based on his legendary works like It, and The Shining. 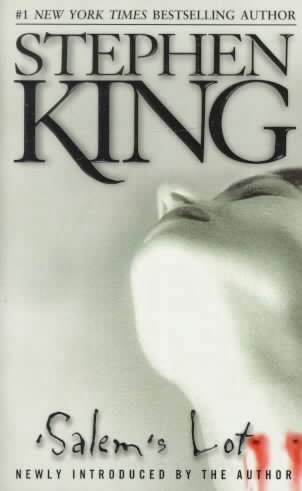 First up in this effort is Salem's Lot.  I'm a little ashamed to admit that not only have I not read this novel, I haven't seen either of the television miniseries based on it. Although, I have read the two short stories that take place within the same world as Salem's Lot but after the events of the novel; Jerusalem's lot and One for the Road.

Going into the novel I only have two established thoughts. First, I like the idea of Stephen King writing a horror story about vampires, especially since he's been quoted on more than one occasion that this is his favorite novel he's written. And second, if the title and nickname of the town is derived from "Jerusalem" aren't we all pronouncing it wrong?

I'll be the first to admit, I'm not the biggest fan of vampires, and the recent hollywood over indulgence of them, has soured me even more.  With that said...

This book took me a month to finish all 631 pages, and that was time well spent.  Stephen King spent roughly 300 pages building the town, with no real elements of horror but it had a two fold purpose, 1) you got to know the characters and the town around them, and 2) it built suspense forcing you to fear for these people's lives since you know it won't end well for at least some of them.

Although this was only King's second novel, it was crafted to such expert timing that you engaged from the very beginning.  The writing is raw and emotional, much more so than the more polished King of recent books (still good in their own rite).

My two recommendations for those interested in reading this book are 1) don't let the fact it's about vampires turn you away, and 2) don't let the impressive page count intimidate you.  Pick it up, and just try to put it down with out wanting to know more.

On to the obligatory rating...

It may have taken me longer than it should have to read this book, but I'll be sure to pick it up again when I want that brand of suspense that only Stephen King can supply.
Posted by azarrising at 3/31/2014 01:00:00 PM No comments: Links to this post

Email ThisBlogThis!Share to TwitterShare to FacebookShare to Pinterest
Labels: What I'm Reading

I recently went to a concert at the Stanhope House.  It's basically a large bar that has a stage.  Apparently, it's mostly a Jazz/Blues venue, but I went with my brother to see Pharoahe Monch, a rapper.  And because he's a rapper, the opening acts were also hip-hop... all of them.  There was 8 opening acts, each performed 3-4 quick raps and were gone.  I would have much rather had 2-3 opening acts with longer sets, but as it was there was a good variety, by which I mean more white rappers in a single room than the 8 Mile movie auditions.

The M.C. of the night was also the first emcee of the night, an overweight Irish rapper with a vibrant red beard... and he was impressively good.  There was also an angry ICP (look it up) reject with red and white face paint on.  Even more interesting was his hype man was garbed in all black and wore a chromed out baby mask.  His hype man wore a mask and couldn't say anything! Not sure they understand the point of a hype man, but I will say he provided the comedy for the night when he turned his back to the crowd so he could lift up his mask and drink from his beer while Face Paint continued with the show.

My real reason for writing about this night is to acknowledge how hard it must be to get on stage and perform your art like that.  I was watching as one particularly bad performer was on stage, and despite not having a good flow or even decent lyrics, he worked the mic like he owned it with a confidence that's needed in this world of music.  No matter what type of music or the size of the venue, these musicians (whether good or bad) are putting themselves on display in a way other artists typically don't have to.

Authors, we write privately, edit our own work, then facelessly submit our work online to a publisher we'll likely never meet, who accepts or rejects us in an email, usually in what's called a 'form letter', which means they basically copy and paste the same rejection they gave the previous author.  Then we, as authors, make some adjustments and send it on to the publisher.  Rejection for an author is a faceless infraction that usually results in a better piece after more editing.

Musicians on the other hand, have to preform face to face and look their audience in the eyes as they either cheer or boo.  Even their practice rounds have to be live for feedback on whether or not their getting better or not.  I practice on a sheet of paper, and if I'm not happy with it, I can crumble it up and throw it away (sorry recycle).

All this to say, I'll always respect musicians for performing regardless of quality while I sit here behind my pad and a pen.
Posted by azarrising at 3/24/2014 12:00:00 PM No comments: Links to this post